There's no better way to explain some code-related issue than providing a test for them, and that is what any NH team member is going to ask you no matter how clearly you described it; that said.. why not being smart enough to provide it since the beginning?

For those who doesn't know what a unit test is, or why could possibly be useful, a unit test is nothing more than a method with some code in it to test if a feature works as expected or, in your case, to reproduce a bug. What makes them so useful is the ability to automatically execute them all; if you hypothetically had a set of test for every feature you coded into the software you're designing, after every change you could test if everything is still working or something got broken. If that triggered your attention, you can read further information on Unit Tests and Test Driven Development here and here, while here you can download and get some info on NUnit, which is the testing framework NHibernate team is currently using; obviously you can google around a bit for more info on this topic, as I'm going to focus on how testing applies to NHibernate bug fixing process.

Ok, back on topic then. If you dared to download NHibernate sources from SourceForge or GitHub, you'd find a well established test project with some base classes you should use to implement the test. BTW, for the sake of simplicity, I created a C# project extracting only the few classes you need to build a test, so you don't need to use the actual NH sources anymore. You can download it here.

The project has the following structure, which is very similar to the one you'd find in the official sources: 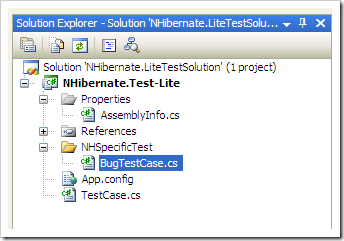 I've mantained classes and namespaces naming in order to let your test compile in the actual NH test project without (hopefully) changing anything on it. Next steps will be

Please note that all the code should be located in a NHSpecificTest folder's subfolder named like the GitHub issue or PR you submitted (for example, GH1234). So, once you've created the issue or PR, you should do a little refactoring work to modify your test's folder and namespaces.

It would be hard to test an ORM without a domain model, so a simple one is mandatory, along with its mappings. My advice here is to keep things as simple as possible: your main aim should be trying to isolate the bug without introducing unnecessary complexity.

For example, if you find out that NHibernate isn't working fine retrieving a byte[] property when using a Sql Server 2005 RDBMS (it isn't true, NHibernate can deal quite well with such kind of data), you should create a domain entity not so different from the following:

Mappings of such a simple domain model should be quite easy and small sized; the standard way to proceed is creating a single mapping file, named Mappings.hbm.xml, containing mapping definitions of all your domain model.

As we're going to see shortly, test base class, in his default behavior, looks for such a file in test assembly's resources and automatically adds it to NHibernate configuration.

Setting up the test class

A test class is nothing more than a class decorated with the TestFixture attribute and which inherits (in our test environment) from BugTestCase base class. If you remember, we are going to test a fake bug about NHibernate incorrectly retrieving a byte[] property from the database. That means that first of all we're going to need a database with a suitable schema and then an entity already stored in it.

The default connection string points to a localhost server containing a test database called NHibernate; if your environment fits well with that, you have nothing to change in the app.config file. The test base class takes care of creating all the tables, keys and constraints that your test needs to play fine, taking into account what you wrote on the mapping file(s).

What about the entity we should already have into a table to test the retrieving process? The right way to inject custom code before the execution of a test is overriding the OnSetup method:

That code is invoked once per test, just before its execution; the infrastructure provides a OnTearDown virtual method as well, useful to wipe away your data from the tables and present a clean environment to the next test being executed:

The test class is almost setted up, we only need one last element: our imaginary bug happens only when dealing with a Sql Server 2005 database, things seem to be fine with other RDBMS. That means that the corresponding test only makes sense when that dialect has been selected, otherwise it should be ignored; another virtual method, called AppliesTo, serves for this purpose and can be overridden to specify a particular dialect for which the test makes sense:

The test method is were you'll describe how NHibernate should behave although it actually doesn't. It's a traditional C# method, that usually ends with one or more Asserts, by which you verify whether things went as you expected. Our "fake" bug was "In Sql Server 2005, NHibernate can't correctly load a byte array property of an entity"; a good test for that could be something like

Your test class may contain as many test methods as you need to better show the cases in which you experienced the issue. If it relies on NHibernate 2nd level cache, you can turn it on and off simply overriding the CacheConcurrencyStrategy propery in your test class:

Please remember that in the simple test project I provided, 2nd level cache is disabled by default. However, NHibernate official test project uses nonstrict-read-write caching strategy for every entity, because every "green" test should pass with caching enabled as well.

When NHibernate doesn't work as expected, the best way to describe the issue is providing a good unit test. NHibernate.LiteTest helps you writing tests that are so similar to the official ones to be directly integrable in the actual NHibernate trunk. So, if you think you've just discovered a bug,

Obviously, if you think you're good enough, no one will be offended if you submit a patch, too.